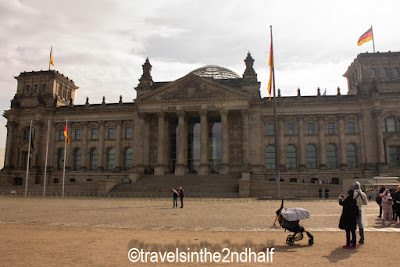 I am not a big fan of government buildings. I try to avoid garish displays of uncritical nationalism, and capitals usually offer that in abundance. But the historical and architectural significance of The Reichstag made it a capital that I wanted to see.

Construction on the Reichstag began in 1884, thirteen years after German unification. Paul Wallot’s as a neo-baroque design was inspired by Philadelphia’s Memorial Hall. The building was completed in 1894 and opened as home to Germany’s Bundestag. After World War I, as Germany transformed from a parliamentary monarchy to a republic, the Reichstag served as the seat of Germany’s government.
On February 27, 1933, one month after Adolf Hitler was named Chancellor, the Reichstag was gutted by an arson fire. The Nazi government blamed communists and used the fire as a reason to suspend most civil liberties in the country. While many historians at the time also blamed communists, today the general belief is that the Nazi’s burned down the building in order to create chaos and grab a strong hold on power. In fact, the Nazi’s never reinstated the civil liberties that were taken away by the Reichstag Fire Decree.

The building was not repaired during the Nazi regime, and then sustained more damage during World War II both by air raids and when the Red Army fought their way into Berlin. In 1945, the Reichstag was a symbolic target for capture, and there is an iconic photograph by Yevgeny Khaldei, of a soldier raising the Soviet flag over the building.

After World War II, with Germany divided, there was a question of where to put the capitals. West Germany chose Bonn, and East Germany chose Berlin. Since the Reichstag was in the American sector, they were not able to use it for their parliament, and it sat vacant. No repairs were carried out until 1961. When the building was repaired, it was not returned its architectural beauty, instead, it became a place ceremonial meetings and one-off events. This was the situation until German reunification in 1990.

In 1992, British architect, Sir Norman Foster, won a competition to redesign and rebuild the Reichstag. Construction began in 1996. The entire building was gutted and a new meeting hall for Germany’s Bundestag was built within its original walls. Atop the Bundestag Hall a large glass dome was constructed. The dome is 40 m (90 ft) in diameter and 23.5 m (50 ft) tall. The center of the has a tower of mirrors that serves two purposes. It provides light to the hall below. It is also a ventilation tower, allowing warm air to rise up and out of the building, even using this air flow to generate electricity for the building. At the center of the dome is a pictorial exhibit of the Reichstag’s architectural and political history.


The real draw of the dome is its double-helix ramp to the top. A free audio-guide will fill in the visual and historical details as you climb to the apex. The guide points out the key sights along with their, and the city’s, history. One cool aspect of the tour is that it is triggered automatically by your position on the ramp. So you can walk at your own speed. Stop to take photos. Enjoy the view. The audio-guide will wait for you to get to the next spot.


There is also a large terrace on the roof-top, with places to sit and enjoy the day. You can look out across the Tiergarten or watch people enjoying the day on the grass in the Platz der Republik. There is also a roof-top restaurant where you can enjoy lunch. Reservations are recommended. 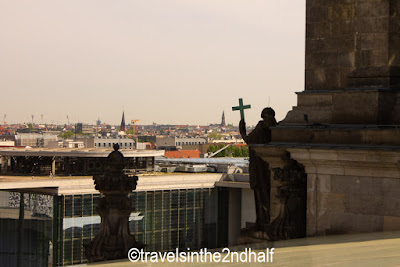 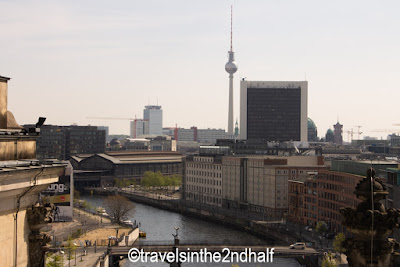 Entrance to the Reichstag is free, but tickets MUST BE RESERVED IN ADVANCE. There are two ways to do this. You can reserve on-line tickets at least 2 weeks ahead of time by going to this site. You can book a visit for any time between 0800 and 2400. Or, if, like me, you don’t plan that far in advance, you can go to the kiosk across the of Scheidemannstrasse from the Platz der Republik and book tickets for any open times during the next three days. SAME DAY TICKETS ARE NOT AVAILABLE. You will need photo ID when you book tickets and when you arrive at the Reichstag. Make sure you get to the welcome center 15-30 minutes before your scheduled time, as you will have to go through airport style security to enter the building. 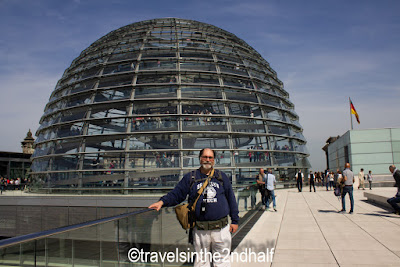 While there is a Bundestag station on the S55 line, this train only runs about once/hour. The next closest stations are the Brandenburg Tor and Friedrikstrasse stations. Each on has frequent service by many train lines.
Posted by Jonathan L at 5:00 AM