Berlin's Museum Island hold many treasures of the ancient world

Any discussion of visiting art works in Berlin must start with a look at Museum Island. This collection of five museums in the middle of the Spree River is home to a vast collection of art and artifacts dating from ancient times through the end of the 19th century. There are five buildings currently on the island. The oldest, the Altes was built in 1830, while the newest is the Pergamon which opened in 1930. Each houses a different part of the State Collection and is worth a trip. To see them all would probably take a full day, at least. I came had two specific exhibits   I wanted to explore, but I found a lot more.

I started my visit at the Bode Museum. The building opened in 1904 as the Kaiser-Fredrick Museum, and it was renamed in 1956 after its first curator, Wilhem von Bode. I chose this museum to start because I think it is the most beautiful building on the island. The interior underwent a major renovation between 1997 and 2006, but its exterior details are intact, restored after World War II. The most striking feature to me are the two domes, on at either end of its interior galleries. The entrance, at the northern tip of the island, brings you into a hall under the large cupola. A statue of Kaiser Fredrick III has center stage in this hall, but the large dome is the real star.

The Bode houses the Byzantine and numismatic collections of Stadtmuseum, and the exhibit halls are filled with wonderful pieces, but the curators have taken advantage of the ongoing renovations of Museum of Ethnography to put together a fascinating exhibit – Beyond Compare. The curators have grouped together African pieces with European pieces from the Bode of similar themes. Their idea is to demonstrate not just how themes are universal, but how a colonial, Eurocentric view of art led works from other places to be treated as less worthy than their European counterparts. 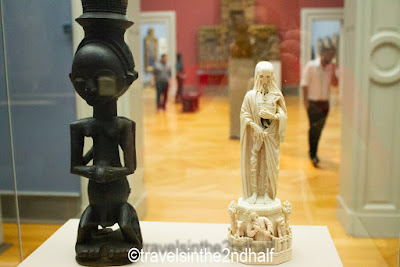 The Pergamon houses the Islamic and Near-Eastern collections, along with three of the largest pieces in the stadtmuseum – The Ishtar Gate, The Miletus Market Gate and the Pergamon Altar.

The second floor is home to the Islamic Art Collection. Here you will find wonderful examples of art and home design, mostly from Egypt and Iran (Persia). One of the most interesting pieces is the Aleppo Room. These interior walls were created in the early part of the 17th century CE for the home of a Christian merchant in the city of Aleppo in the Ottoman Empire (now Syria). Measuring a total of 35 m in length, these wood panels are decorated with Middle-Eastern motifs and quotes from the Bible and the Koran.

Another piece that I loved was prayer niche from the Bey Hakim Mosque in the Ottoman empire. The mosque was constructed during the 13th century CE.  The prayer niche served two purposes. It was built indicating the direction of Mecca, and thus show the direction that the worshipers should face during prayers. Its shape also served to amplify the voice of the imam leading prayers. This was important and the imam, who also faces toward Mecca and away from the members of the mosque.

While there are excellent pieces in the Islamic art collection, the highlights of the Pergamon Museum are on the first floor of the building. They are the large, architectural objects that were brought to Germany during the early part of the 20th century. Let’s start with the Ishtar Gate. This entrance to the city of Babylon was built in 575 BCE by King Nebuchadnezzar II. It was dedicated to the goddess Ishtar, and played a key role in the New Year celebrations, which took place 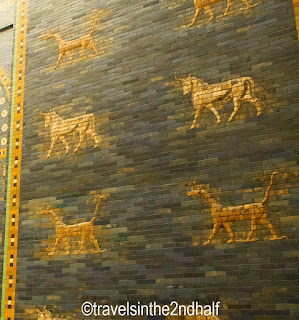 around the vernal equinox. This is only the smaller, outer gate, but a nearby model shows the entirety of the wall and passage-way, along with the approach. The presentation here is a reconstruction, incorporating both original pieces and bricks cast in modern times to recreate what existed. The wall was covered with bricks that had a dark blue enamel on one side, meant to mimic the color of lapis lazuli. The walls were decorated with reliefs of lions, bulls and dragons. The Ishtar Gate also includes a cuneiform inscription that begins as follows:

Nebuchadnezzar, King of Babylon, the pious prince appointed by the will of Marduk, the highest priestly prince, beloved of Nabu, of prudent deliberation, who has learnt to embrace wisdom, who fathomed Their (Marduk and Nabu) godly being and pays reverence to their Majesty, the untiring Governor, who always has at heart the care of the cult of Esagila and Ezida and is constantly concerned with the well being of Babylon and Borsippa, the wise, the humble, the caretaker of Esagila and Ezida, the first born son of Nabopolassar, the King of Babylon, am I.

This must have been an awe-inspiring entrance to the city. Blue was a rare color in ancient times, so approach this huge blue façade must have been a unique experience for visitors. I often feel that our movies and have done a disservice to history. So many ancient structures have been presented as dusty and gray or brown. The reality was often very different. Statues in in ancient Rome and Greece were often painted and structures were often decorated in ways that were not shown on tv or the big screen.

Once you have taken the time to fully appreciate the Ishtar Gate, walk through the door at the center and you pass from Babylon to the Roman Empire. The Market Gate of Melitus is a marble structure that is over 16 m tall and 30 m wide. It served as the southern gate-way to the agora in the town of Melitus, a Roman city in what is today Turkey. It was built in the 2nd century CE and probably destroyed by an earthquake during the 10th or 11th century CE. As with the Ishtar Gate, the damage from the earthquake and the ravages of time have required that the museum create a reconstruction of this ancient gate, while much of the 2nd level is the original material, the builders used many modern materials to recreate the lower level. That being said, the this is still an amazing structure. You can see the niches that contained statues of emperors and warriors, and the platforms that provided a view out over the marketplace.  Also present in the hall is a mosaic tile floor depicting the story of Orpheus. The floor was probably in the dining room of house in Miletus. The central figure is recognized as Orpheus because he was known for his ability to entrance animals, and the floor is shows animals being tamed by Orpheus playing his lyre.

Unfortunately, the Pergamon Altar, which gives the museum its name, was unavailable when I visited. The building has been under-going a massive renovation, and that section was still not open. I will have to return, because the photos I have seen in other reviews of the Altar are magnificent.

The last piece that I wanted to see was in the Neues Museum. Originally built in 1857, here is the home to the Egyptian and Ancient Northern European collections. The building was heavily damaged during World War II and did not reopen until 2009.
The housing of Egyptian and Bronze Age European pieces under same roof makes for an interesting juxtaposition of experiences as you walk through a galley of bronze and steel swords and farming tools and turn the corner into a gallery of Egyptian statues. But the main reason to visit the Neues Museum is to view the Nefertiti Bust. Nefertiti was the wife of Pharaoh Akhenaten, who ruled during the 14th century BCE. The bust was believed to have been sculpted around 1345 BCE in the city of Armana, which was the capital of Egypt at the time. It was found in a workshop with several other busts that had yet been finished.

The bust is in excellent condition, with colors that are still vibrant and only minimal damage. It is a unique and beautiful piece, presented in a corner gallery, alone, except for some background information. Photography is not allowed in the gallery, but the guards were quick to point out exactly where you could stand to try and get a shot, if the crowd breaks long enough to give a clear view.

A brief note on provenance and ownership of these pieces. There continues to be much controversy around the world over whether or not pieces that were taken, with or with the permission of the local governments at the time, should be returned to their country of origin. I do not present this review as endorsement of status quo. It is just a review of the art and architectural works in their current situation.

I did not visit the Altes Museum or the Alte Nationalgalerie on this trip. Berlin has so many choices, and I really wanted to see the Käthe Kollwitz Museum on the other side of the city, so I will have to catch up with what I missed on another trip.

Getting There:
The closest train stations are the Friedrickstrasse Station, the Oranienbergerstrasse station and the Hecksher Markt stations. They are all served by multiple U-bahn and S-bahn lines.
Posted by Jonathan L at 5:00 AM