The Memorials of Berlin - Part 1

Before we explore more of modern Berlin, I feel that I have to take the time to look at the biggest issue in Germany’s history - the rise of National Socialism and the holocaust. How does a country recover from fascism and remember its victims? In Berlin there are many memorials, from small to large. They often show up in unexpected places, and they represent an attempt at dealing with the past that many countries, including the United States, could learn from. 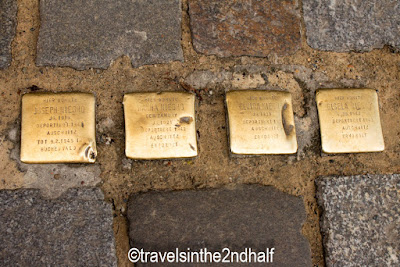 Let’s start with the smallest (in size) memorials, the Stolpersteine, or “stumbling blocks.” These are concrete cubes, 10 cm x 10 cm, and topped with a brass plaque. They are placed into sidewalks and streets around the city to mark final residence that victims of Nazism. This ongoing project was started in 1992 by Gunter Demnig, a German artist. Working with local schools and historical organizations, research is done into the lives of persons who were murdered during World War II and their last, freely chosen place of residence is determined. A plaque is produced giving the victim’s name, their birth year, the year of their deportation and death, and the place of their death. As of 2015, over 50,000 stolpersteine have been placed in more than 700 cities and towns throughout Europe.

Take a walk around the streets in Bayerisches Viertel, the Bohemian Quarter, and you will find our next set of memorials, but this time you will have to look up instead of down. In 1993 artists Renata Stih and Frieder Schnock installed 80 street signs on light poles. They chose this part of Berlin because in 1933, it had the highest concentration of Jewish residents in the city.The purpose of this memorial is to illustrate the extensiveness of the anti-Jewish laws that were passed between 1933 and 1945. These laws were designed to disrupt the every day life of Jewish residents. Laws were passed restricting everything from the ability to hold certain jobs, to the ability to buy milk and eggs.

Each sign has a graphic representation on one side and a sentence summarizing the law on the other. Bayerisches Viertel was home to many of Berlins Jewish businessmen and cultural leaders and it was a center of literature and politics, so it was a natural choice for this memorial. 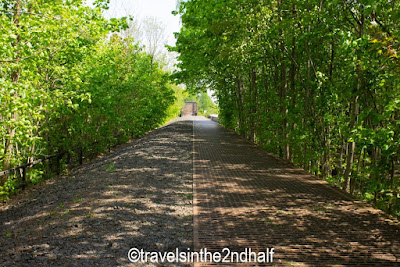 For a visit to one of the more sedate and disturbing memorials, you have to leave the center of Berlin and head out to its suburbs. Take the S-7 train west to the Grunewald station. This area is home to many large mansions along the Havel River. It is also the place where those who were sent to concentrations camps were loaded onto the trains that carried them. 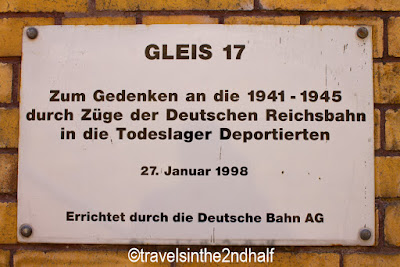 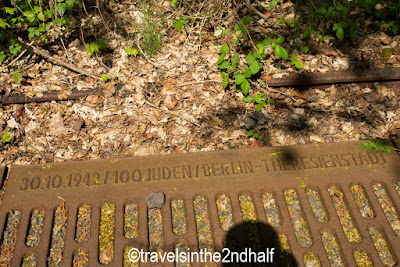 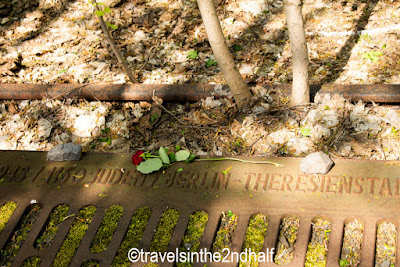 When you arrive at the station, walk downstairs from the platform to the passage under the tracks. Follow along to Gleis 17 (Track 17) and climb up the stairwell. You will find yourself on an abandoned platform. Trees are growing among the old rails. It is a beautiful a peaceful sight, quiet, cut off from the noise of surrounding traffic. Walk along and soon you will encounter metal grates that mark the edge of the platform. But look carefully at the edge of the grate. You will find a date, a number and the name of the concentration camp. Each grate represents one train load of people exiled out of Berlin, most to their deaths. As you walk along, from one grate to the next, look at the numbers. They start small, ninety or one hundred people on a train. But quickly they grow. Soon you see trains carrying more that one thousand people. 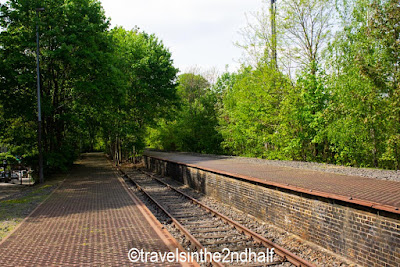 This memorial was constructed by Deutsche Bahn, the German national railroad company, in 1988. To me, it was the most moving and transcendent memorial I encountered. It is quiet, and far away from the hustle and bustle of the city, which is why the Nazis chose this place. Like the stolperstein, it is understated, but that plays to the banality of the Nazis in their effort to exterminate Jews and other “undesirables.” And like much of the world’s intentional blindness to what was happening in Europe, if you didn’t know it was here, you wouldn’t know what it was. There are no great signs or banners. It is not on most of the tours. But find your way to Gruenwald Station and you will find a tribute that brings you inside the immensity of the loss and the efficiency with which these murders were carried out.

In fact, all of these memorials highlight the commonplace character of the attacks on Jews and others in ways that the larger memorials sometimes miss. And that is why they are so important. It is easy to become lost in the large numbers of those killed by the Nazis. These numbers hide the insidious nature of fascism. It never appears fully grown, but creeps into existence convincing ordinary people to accept one small change after another, until, like the frog placed in cold water on a stove who doesn’t notice the heat is killing them. Until it is too late. A lesson that still important today.