New York City used to be a center of manufacturing and shipping, and the part of Manhattan known as Chelsea played a key role in all of it. Situated along the piers of the Hudson River, its warehouses and factories were well placed. Today, most of the buildings are used for other purposes, but they left behind something that has been turned into a jewel - The High Line.

Chelsea takes its name from the estate of Thomas Clarke, a retired British general, who bought the land there in 1750, and named it after the Royal Hospital Chelsea a home for retired soldiers in London. Clarke is probably best known as the grandfather of Clement Clarke Moore, who wrote A Visit From St. Nicholas, and who was born and lived in the area. As the neighborhood was developed during the early 1800’s, warehouses were constructed along the new piers that were being built on the Hudson River. By 1860, Chelsea was home to distilleries of turpentine and camphene, and a huge complex that converted coal to gas. To service these businesses, the Hudson River Railroad built freight tracks from 35th street south to Spring Street, in between 10th and 11th Avenues.

Chelsea continued to grow, both as an industrial area and as a home to working people. The street level right-of way became more and more dangerous. In 1929, New York City decided to construct an elevated rail line, along with the elevated West Side Highway. The line was built through the center of the blocks, and this allowed trains to pull up directly to the buildings to load and unload materials, keeping traffic off of the local streets. The tracks were in use from 1933 until they were closed by Conrail in 1980 and the right of way was abandoned at that time. In true New York fashion, its future was mired in court cases for 12 years after it closed. While southernmost section had been demolished in 1960, and several more blocks came down in 1991, the tracks still stretched from 35th Street south to Gansevoort Street. During that time, while it was officially closed to the public, nature began to reassert itself. Wild grasses, shrubs and trees grew along and among the tracks. It also became a place where “urban explorers” walked among the flora and fauna during the day, and raves took place at night.

During the 1990’s, Mayor Rudy Giuliani, at the behest of real estate interests, pushed to demolish the rail line. In 1999 local residents formed The Friends of the Highline. They began to organize to have the rail line, which was still structurally sound, to be repurposed as a park/greenway, similar to the Promenade Planteé in Paris. The group received a huge boost when Diane von Furstenberg and her husband Barry Diller, threw their support behind the effort, and also from the photography project by Joel Sternfield, who spent a year documenting the resurgent growth of nature along the structure. They movement was able to hold off the developers until 2004, Michael Bloomberg, who was elected mayor in 2002, committed $50 million to help create the park. Altogether Friends of the Highline raised $150 million for this project. 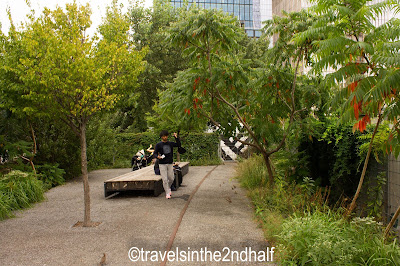 The first section of the Highline Park opened in 2009, from Gansevoort Street north to 20th street. Today it spans the entire length of the rail line, 1.5 miles north to 35th street. It offers a unique view of the city, as passes between, among and sometimes through the old industrial buildings of Chelsea. Visitors can also walk by some of the newest buildings in NYC, as the construction boom along New York’s West Side continues. In building the park, the designers left much of the natural growth in place. They built a path that weaves through the grasses, trees, and the original rail lines.


Even though it can get crowded at times, this is New York City after all, I really enjoy walking the Highline. It offers everything I love about the city. It is a great place to people watch, especially at the spots offer seats or overlook 10th Ave. Visitors become engrossed in watching the traffic below. To me this is a great chance to take photos of people who are lost in their own world. The Highline also provides the opportunity to see the working sides of architecture. The park takes you past the sides of building that were meant to be hidden from public, and designed for to function as a part of industries they supported. Finally, the Highline also gives a hint to just how quickly the natural world undo the work that humanity put in covering it up. 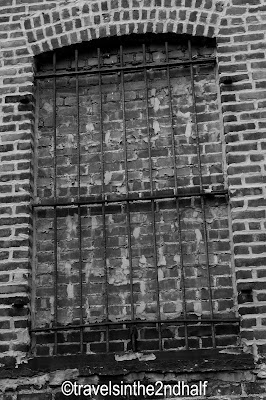 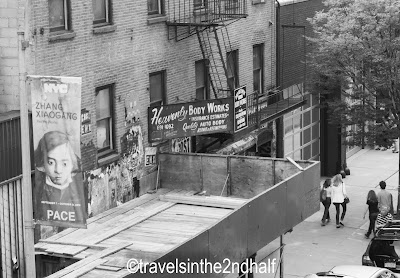 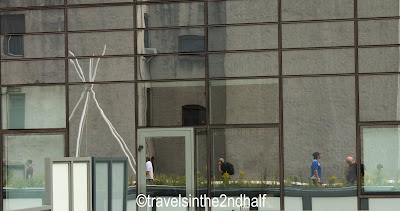 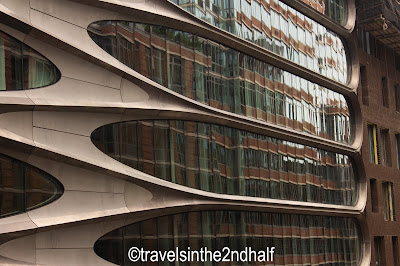 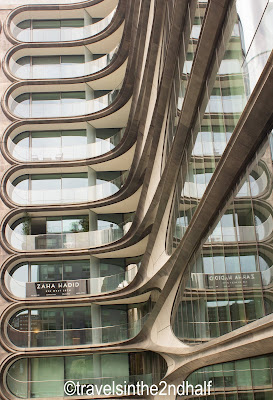 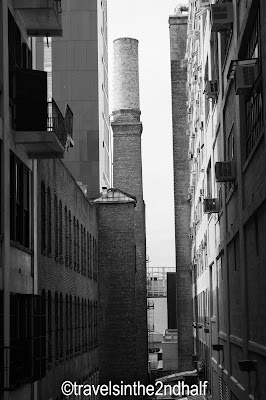 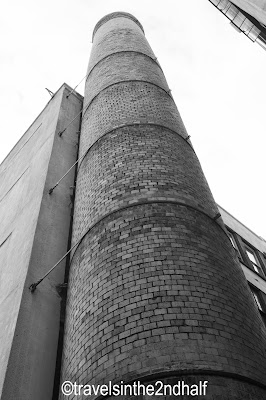 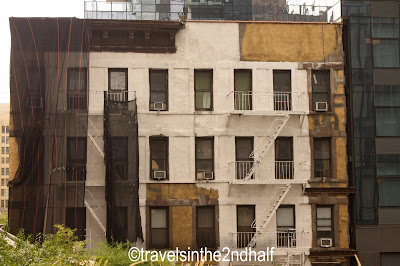 Head over to the far, west side of the Chelsea neighborhood of Manhattan. Climb (or take an elevator) up to The Highline. It is not an escape from the city, but it offers a fresh view of what surrounds us. 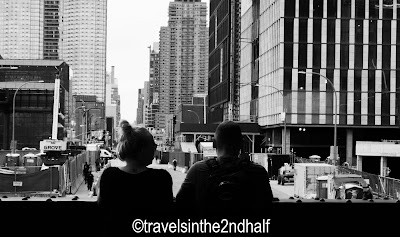 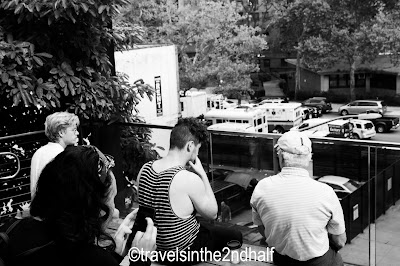 Getting There:
The Highline has many entrances along its length. Its northern end is on 34th street between 11th and 12th Ave. Take the #7 train to the 34th Street Hudson Yards Station. Walk west 1 block along 34th Street. Its southern end is at Gansevoort Street and Washington Street. Take the #A, C, E to 14th street. Walk west to Washington Street, turn right and walk south to Gansevoort (about 0.5 miles).
Posted by Jonathan L at 5:00 AM