When the World Trade Center opened in New York City, in 1973, it was a massive office complex. It contained seven buildings, including the “Twin Towers,” and over 13.4 million square feet of office space. Underneath was a shopping mall and a transit hub that brought together six subway lines and the PATH trains to New Jersey. The attack on September 11, 2001 brought all of that crashing down.

Now, seventeen years later, most of the area has been rebuilt. There is a memorial and museum dedicated to those who lost their lives in 2001. Four new office buildings have been completed, including the new One World Trade Center, which at 1776 feet in height, is the tallest building in the western hemisphere. The new underground shopping mall has opened, and it will expand to occupy the bottom 3-4 floors of three of the buildings in the new World Trade Center complex. And the new transportation hub has finally been completed, so one afternoon this fall, I traveled down to explore this new building.

In the 1960’s and 70’s, office space was often given priority to making transportation hubs beautiful, or even thoughtful. Pennsylvania Station was torn down and covered with a behemoth of commercial and office space along with the new Madison Square Garden. The ticket offices, waiting areas and other amenities were buried underground in one of the ugliest and most uncomfortable major train stations I have seen anywhere. So, it is not a surprise that when the original World Trade Center was built, its transit hub was almost and afterthought. Commuters had to walk through long, crowded tunnels. It felt like a rat’s maze, with hundreds of people rushing in one direction or another. It certainly wasn’t a pleasant place to visit, and definitely not a destination.

Rebuilding the World Trade Center Transportation Hub gave planners a chance to put more thought into the experience of commuters. The hub was greatly expanded. Today is connects the PATH trains with sixteen subway lines. It also provides access to the Battery Park City Ferry Terminal, which offers service to eight destinations on the New Jersey side of the Hudson River.

The jewel of the hub is The Oculus. Designed by Santiago Calatrava, it is a beautiful and inspiring structure. Above ground, its many support beams cross, curve and fan out, as a bird’s wings. The Oculus also includes windows along the length of its spine and along the sides of the building. This allows the interior space of the hub to be filled with natural light, making the massive open space feel warm and inviting. This hall sits about 15 m below ground level, and forms the northern end of the new underground mall. It is surrounded by a balcony which provides a second path for commuter transferring from one train system to another, while also giving a wonderful perch for people watching. At each end of the hall there are observation platforms. Here visitors will find a sweeping view of the entire space. These areas are filled with photographers and selfie takers, but people move through fairly quickly, so with a little patience everyone gets a chance to take their pic.

I have to say, for sixteen-and-a-half years, I have had no particular desire to return to the World Trade Center site. The memorial is really a place where families come to remember those they lost, and tourists come to commemorate the events of 9/11. Truthfully, most New Yorkers don’t visit the museum. But the architectural splendor of the Oculus is something I will return to time and again. 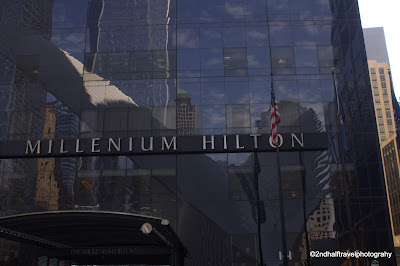