My first full day in Bologna was Easter Sunday. I was unsure of what may or may not be open for visitors. Holidays can be iffy for travelers. What I didn’t realize was that I had my holiday wrong.

I started off with breakfast at Pasticceria Saffi, a small cafe across the street from my apartment. Saffi is usually closed on Sundays, but on Easter it was open, and there was a constant flow of customers picking up the breads and cakes they wanted to help celebrate  the day.I stood at the bar with my cappuccino and ham sandwich, listening to the locals complain about the results of the football matches from the night before. Right away it was clear the Easter in Bologna was going to be different than in New York.


After breakfast I walked past Porto San Felice and into Bologna’s Centro Sotrico. After wandering around for a while I ended up in front of  the Basilica di San Francisco. I waited until after the morning service was over, and then went in to explore. The church was built during the 13th century. It has a large, open interior, with no supporting columns inside. The nave has three aisles leading up to the altar, which was built in the 14th century and depicts the life of Saint Francis of Assisi. 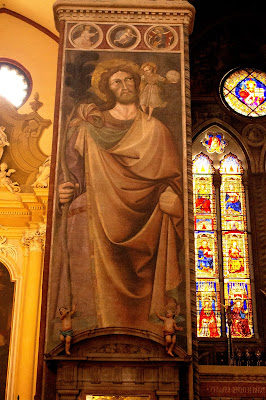 Leaving Piazza San Francisco, i walked to the Piazza Maggiore. The main square of the city is home to the centers of civic life, the Basilica San Petronio, Bologna’s largest church, and the Palazzo Comunale. The piazza is a large open space, lined with restaurants and shops. The main tourism office is on the piazza. On Easter Sunday it was filled with people. There were families heading into the basilica for service. There were tourists, mostly from Italy, taking pictures and lining up for the two tour busses that start there routes at the square. And they all seemed to be going into the office of tourism, looking for help figuring out what to see or do. 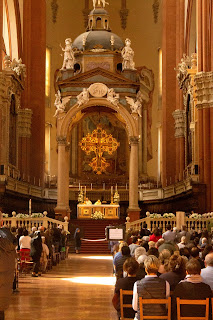 To my surprise, the Basilica di San Petronio was fully open to public, even during its Easter Mass. Construction on San Petronio began during the 14th century, and it is still not complete, but it was consecrated in 1954. The building is the 6th largest church in Italy, at 132 m long and 66 m wide. It has 20 side chapels along the nave. Some of the chapels were decorated for Easter, with white and gold clothes covering the artwork. 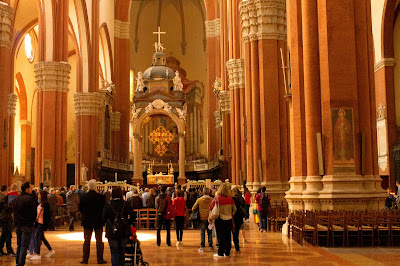 Having the church open to tourists on Easter made for an interesting juxtaposition of people. In the back were tourists, wandering around, looking at the artwork and architecture, taking photos even if they didn’t pay the €3 license fee. Meanwhile, the center of the nave was filled to capacity with worshippers. The service continued and communion was given. It was odd, and I was not fully comfortable, so I cut my visit to the church short.

That is how I spent my Easter morning. An atheist visiting two churches in Bologna, not my usual way to spend the day.
Posted by Jonathan L at 5:00 AM