Visiting some of Bologna's Museums

Bologna is an old city with a history in education. It is home to beautiful churches and distinctive porticoed streets. It is also home to some wonderful museums that offer both classic and innovative views of art. After spending Easter morning visiting some churches (see last weeks post) I ate lunch and took in two of those museums. 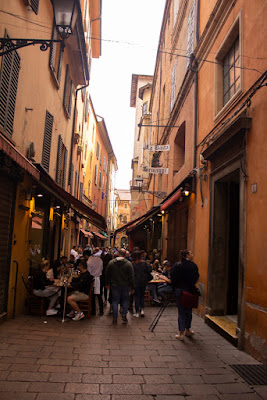 For lunch I walked half a block off of the Piazza Maggiore, to a great lunch place, the salumeria Simoni Laboratorio. In 1960, the Simoni family opened a salumeria in the Centro Storico of Bologna, two blocks from the center square of the city. In 2015 they opened their restaurant/laboratory on via Pescherie Vecchia II where you can order and eat from a menu of sandwiches and plates. I ordered the ballerina and for €5 I received a large sandwich of amazing ham and pecorino cheese. It was delicious.

After lunch I walked across the square to the Palazzo d’Accursio, or City Hall. This collection of buildings holds the offices of Bologna’s government along with the Collezioni Comunali d’Arte. The museum occupies the second floor (third floor for us Americans) of the palazzo. The rooms were originally built for the Cardinal Legates, representatives of Pope, who lived there from the 16th century until 1859. The museum houses a collection of artists for the Emilia-Romagna region. The art is good, although not outstanding. The rooms, however, are amazing. They have been maintained and restored, keeping the decorations from the papal era in place. 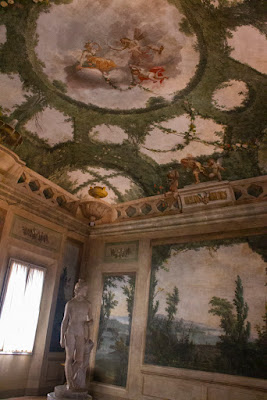 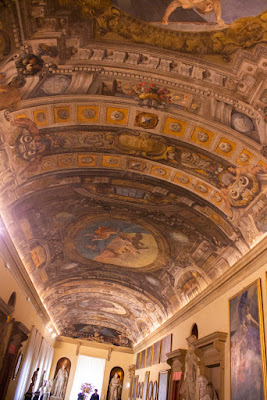 The second museum I visited was the Museo Civico Archeologico. It was not the extensive collection of artifacts from Greece, Rome and Byzantium that brought me to the museum. It was to a fascinating exhibit entitled Ex Africa. This exhibit of 270 pieces from the continent, covering pieces created over the last thousand years, has been put together with the intent to show that art from Africa should be considered as at the same level as art in Europe. The artworks are arranged in themed galleries, presented works tied together by their role in society and culture. Religious statues, masks, and representational figures are shown with representations of the historical growth and changes.

The exhibit highlights the development of art forms, in the same manner that is applied to European art in many museums. Ex Africa also discussed the level of skills needed to create these works, along with how these skills and styles were shared throughout the continent, thus illustrating that the art of Africa was not “tribal,” but represented continent-wide movements. Finally, the exhibit presents modern representations of traditional African art, along with works by contemporary artists, who have incorporated traditional styles.

Being a university city, Bologna offers many opportunities to explore art in ways that the more traditional tourists spots miss. It is worth a visit for its history and for its unique presentations.