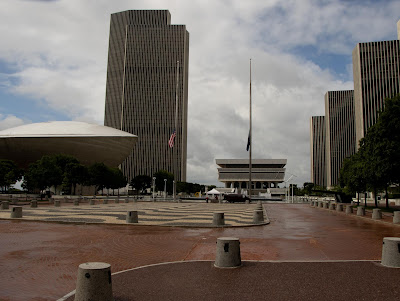 The term urban renewal is very charged. To some people it is the replacement of “urban blight” with new, clean, and useful centers. To others it is the destruction of the working class neighborhoods, replacing them with places that do not serve or welcome them. In either case, it involves displacing thousands of, usually poor, people and the neighborhood they live in.

In the early 1960’s, then-governor Nelson Rockefeller decided that the area surrounding the New York State capitol building, built in 1898, was unsuitable for showing visiting dignitaries. He took control of one hundred acres of buildings, that housed around seven thousand people, by eminent domain.  In 1965, he began construction on his grand scheme, The Empire State Plaza, to build a governmental mega-complex. Architect Wallace Harrison designed the seven buildings, using the brutalist style was popular at the time. These include the New York Legislative Office Building, the Cultural Education Center and New York State Museum, and The Egg, a performing arts center. 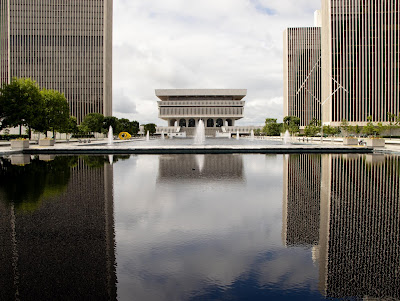 The buildings surround an open plaza that has several reflecting pools. The plaza is home to many activities, and markets. Under the plaza is a concourse that connects the buildings to each other, the parking garages and State Capital Building. The concourse provides weather safe travel between the offices, along with stores and restaurants. During normal times this area is packed, especially on “Lobby Tuesdays” the traditional day for groups to come to Albany to meet with their elected representatives. 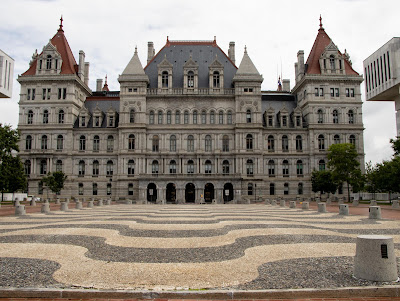 Some people hate the architectural style of brutalism. It is raw and can be over-powering. Personally, I find the whole complex fascinating, if not powerful. What no one can argue with is that Gov. Rockefeller viewed this as a lasting legacy to himself and his family, much in the way that his father had built Rockefeller Center forty years earlier.

To me, Empire State Plaza represents the best and worst of governmental building projects. In my opinion, its origin is disgraceful, but it carries out its job through thoughtful design. It is worth a visit.