When General James Oglethorpe founded the colony of Georgia in 1733, he chose a place along a high bluff to make encampment. And it was here that he created Savannah, the first European city in the area. The area along that bluff has played a major role in the city’s history, and it is a fun place to explore.

Start you walk along E. Bay Street at Savannah’s City Hall. It was completed in 1905, and sits on the site of Savannah’s City Exchange, where cotton was bought and sold.

Bay Street follows the top of the bluff overlooking the Savannah River. It was the original commercial and shipping center of Savannah, where cotton was stored and graded before being loaded onto ships and sent to England and northern mills. Begin at City Hall, and head east. The old warehouses line the edge of the cliff, and at the top, where carts used to bring cotton from the plantations, is Emmett Park. It offers a shade covered walk following the line of buildings than now house shops, cafes and hotels. 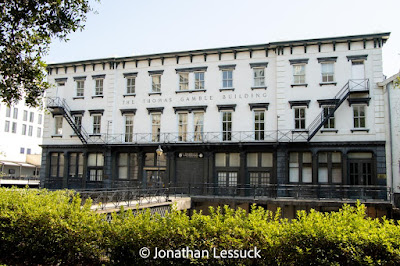 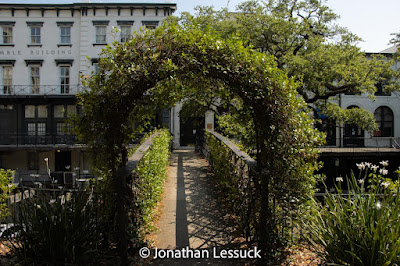 Stop in front of Solomon’s Lodge. Founded in 1734, it is the oldest continuously operating Masonic Lodge in America and its upper floors served as the Cotton Exchange. In front of the lodge is a terra-cotta Griffin. The original statue was destroyed by a run away car in 2008, but this replacement marks the history of the Cotton Exchange. 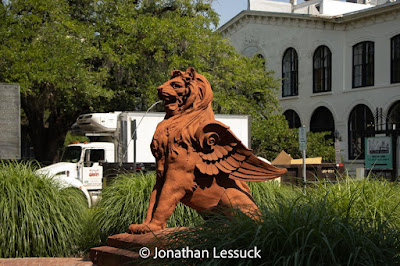 Continue east along the Factor’s Walk, the path closest to the old warehouses. The walk is named after the men who “factored” or decided the prices and amount of cotton bought and sold. They would stand at the top of the bluff and watch the cotton being brought in and out of the warehouses below. 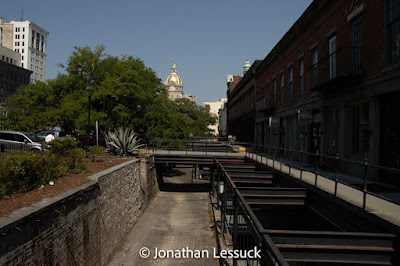 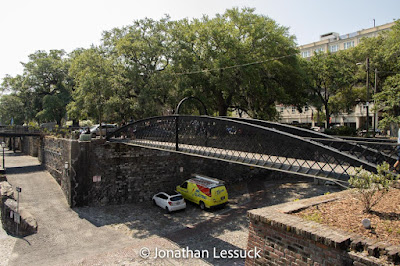 Emmett Park has also become the repository of several other historic artifacts from Savannah’s history.

When you get to the eastern end of the park follow the stairs down to the Broad Street access to River Street. Be careful, the cobblestones are very uneven and they can be slippery. Here you will find two large statues. First is the Olympic Cauldron, which celebrates Savannah’s role hosting the sailing/yachting events during the 1996 Atlanta Olympic Games. Nearby is Waving Girl Statue. This is a tribute to Florence Martus (1868-1943). Her father ran the local lighthouse, and she would come to the river to wave a white cloth, welcoming every ship that entered the port of Savannah for over forty years. The legend is that she was waiting for a long lost lover to return.

Continue west along River Street. Stop in the stores and enjoy local goods, and food. You can buy souvenirs, chocolate, candy, or sit down at one of the restaurants and and enjoy a drink and a meal. Just past the first big parking lot is Rousakis Plaza/Echo Square. Stand on the X and listen to the sound effects created by the plaza and nearby buildings. 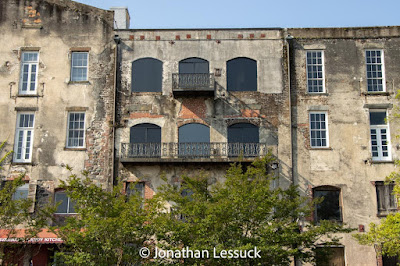 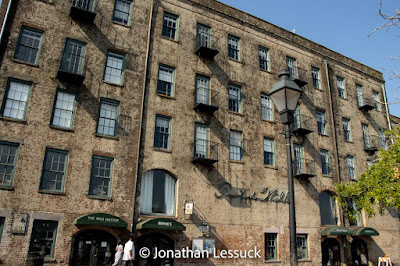 Since you are on the riverfront, take some time and enjoy the boat traffic as it passes by. Water taxis travel back and forth between stops, and there are paddle-wheeled river boats that take people on tours sown the river. But the real celebrities are the massive freighters that ply its waters on the way up to Savannah’s International Port. 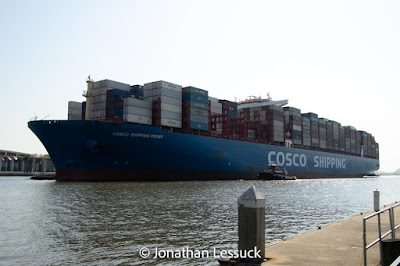 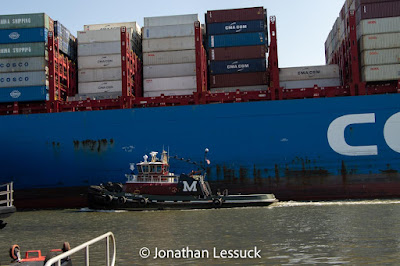 When you arrive at the African American Monument, near the Hyatt Regency Hotel, you have a choice to make. You can continue along the river, toward the Talmadge Memorial Bridge, and you will find more restaurants and stores. Or walk behind the Visitor’s Center and take the elevator back up to Bay Street. You will be back at Savannah’s Beautiful City Hall. 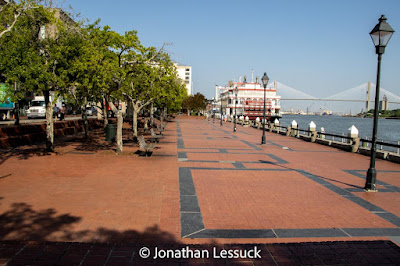