Having spent three days in Bologna, it was time to move on, and I was off to Padua. The drive was a short one, and I had time to make a stop, so I decided to visit the city of Ferrara.

Ferrara sits near the delta of the Po River, and its history is a long one. Construction projects during the 1920’s unearthed Etruscan durian sites dating back to 600 BCE. The name Ferrara first appeared in written records around 700 ACE. After several centuries of struggle for control, the city, and the royal title that goes with it, fell to the Estes family, which ruled from 1264 until 1598. It was during their rule that Ferrara’s main tourist attraction, Castello Estense, was built. But more on that later.

In 1570, a major earthquake hit the city, and greatly disrupted its economy. The blow was so severe that it really didn’t recover until the 1930’s, when it changed from an agricultural trade center to an industrial one. Today. It has a population of 130,000 people. While the metropolitan area is large, the historic center is easily walkable and home to many renaissance palaces and buildings.

I arrived in Ferrara on a rainy Tuesday, and parked in one of the large lots outside of the old city walls. Walking toward the center of town was like walking back in time. I started at the Piazza del Travaglio, really a public parking lot, surrounded by modern buildings. I walked north along the Corso Porto Reno, and started passing buildings that were older and older. I crossed the via Carlo Mayr, and half way up the next block I arrived at the covered entrances to via della Volta, a small street, really not more than an alley. It gave me my first glimpse to what Ferrara looked like in its past.


I continued several more blocks, past the Torre dell’Orologio (Clock Tower), to the Piazza delle Cattedrale and the Piazza di Trento e Trieste. As in many towns, the main cathedral is placed across the street from the city hall. In Ferrara, the old city hall is now home to several stores and restaurants on the ground floor to a few museums upstairs. Given the rain, I couldn’t spend too much time walking around, exploring the town, although I did stop to take some pictures.

My main goal was the Castello Estense. Construction on the first sections of the castle began in 1162, when the Estes family won control of the city. They stayed in power for over four hundred years, until, in 1598, the Duke at that time died without a male heir, and the Catholic Church took control of the city, turning the castle into the home of the Cardinal Legates. In 1870, the castle was turned over to the Kingdom of Italy, and then to the Provincial government in 1927. This history of constant occupation, followed by government control, have left the castle in excellent condition. 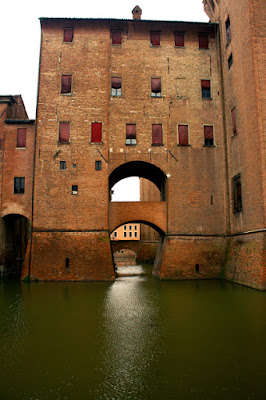 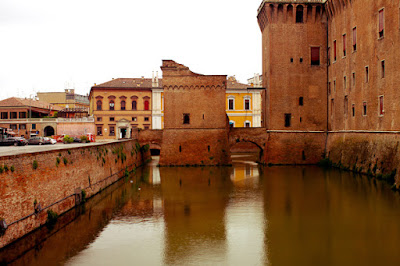 The self-guided tour of the castle begins with its history. The ground floor rooms house models of the building along with posters and artifacts that describe and explain its history, and that of the House of Estes. From there, you travel down into the dungeon, yes, castles really have them, and they were used to confine the political enemies of the Duke. The rival of one of the Dukes was kept here for over forty years.


I then continued upstairs, through various rooms and apartments of the castle. I can’t describe them all, but three things stood out to me. First, the terrace of orange trees. One of the Duchesses, who had gown up further south, wanted the trees, because they reminded her of home. So the Duke had this terrace filled with orange trees in planters. Second, the museum has installed large mirrors, placed at angles to the floor in many rooms. This allows visitors to see the wonderful artwork on the ceilings without having to strain their neck muscles. Finally, there was the Lion’s Tower. Part of Ferrara’s original city walls, it was incorporated into the castle, as the both it and the city grew, and the walls needed to moved. From it, I had views across the city, and if it hadn’t been raining, I would have sen out to the countryside. Be warned, it is a long climb up to the top, but they did have chairs available, for those of us who needed time to recover.

For lunch, I followed the suggestion of one of the people who worked at the castle, and crossed the square to the Osteria l’Quattro Angeli. I had one of my best meals there. I was trying to figure out what to order, and looked at the table next to me. The woman sitting there had just received a plate of oversized ravioli that looked out of this world. So I ordered the same, Cappellaci de Zucca, Burro e Salvia. The pasta was filled with pumpkin and served in a wonderful butter and sage sauce. The pumpkin was sweet and sauce was delicious. 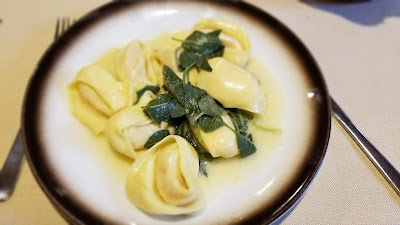 After lunch, I walked to the Palazzo dei Diamanti. Built in 1493, the building is named for the diamond shaped marble blocks that form the walls of building’s exterior. It is now an exhibition space owned by the city of Ferrara, and what drew me was an exhibit of paintings by Giovanni Boldini (1842-1931). Born in Ferrara, Boldini moved to Paris and became one of the preeminent painters of Parisian fashion. He was so important that his studio was almost a “must visit” for women on the Grand Tour. They would come with their newly purchased dresses and have a portrait done to take home with them. The exhibit paired the the paintings of Boldini with some of his contemporaries, including Degas, and also with examples of the clothing he painted.


By this time it was mid-afternoon, and I had to return to my car to head on to Padua. But, on my way to the parking lot I stopped at Pasticceria Dario for a cappuccino and a delicious chocolate croissant. Then back into the rain, on to my car, and off to next stop. 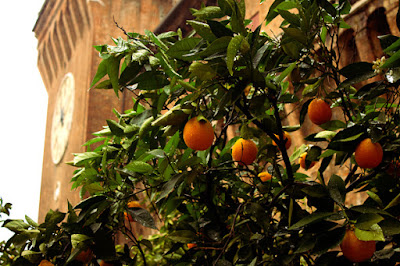