Visit Verona for Some Wonderflul Sights, but Skip Juliet


“Always check the calendar for places you are planning to visit.” This truism is something that should be emblazoned into the mind of every traveler. It helps to know when local holidays are. However, sometimes knowing about a holiday is not enough to avoid some major issues.

April 25th is Italy’s Liberation Day. It marks the defeat of the fascist government by the Allies during World War II, and it is one of the countries biggest holidays. It also came just three days after the Easter Monday holiday which meant that a lot of people took the whole week off, so my plans of traveling in April to avoid big crowds was dashed on the rocks. The best I could do was walk around the crowds during my visit to Verona.

Like many Italian cities, Verona can trace its history back over 2000 years, but its early history was not as part of an Italian Duchy. It was controlled by Goths and the Lombards, who were Germanic, until 774 ACE when Charlemagne destroyed the Lombardi kingdom. Verona gained its independence inn 1226, and by the early 14th century, it controlled the area today known as the Veneto, including the cities of Padua, Treviso and Vicenza. A series of wars with other city-states greatly reduced Verona’s power, and it eventually fell under the control of the Holy Roman Empire, then Napoleon and finally the Austro-Hungarian Empire. What Verona a trophy was its position along major trade routes. That importance carried into the 20th century, where its proximity to the southern corner of the Soviet bloc made it a great place for a NATO air base.


What Verona is probably best know for is being the setting for two of Shakespeare’s plays - the comedy Two Gentlemen from Verona and the tragedy Romeo and Juliet. Of course, it is the latter that brings the crowds of people to the city. The story of Romeo and Juliet is used, very loosely, on what may be the tale of real lovers from Verona’s history. And the city has done its best to take advantage of Shakespeare’s largess. You can visit Juliet’s house, near Piazza delle Erbe. Well, that is, if it not too crowded. The day that I visited, the mass of people trying to enter was large, that I could barely pass by. If you get in you will see Juliet’s balcony, well, not the actual balcony, as this building didn’t have one originally. During the 17th century, the balcony was added in order to meet the expectations of visitors who had read or seen Shakespeare’s play. You can also find Romeo’s house nearby, although ti does not draw same attention. All that being said, I would avoid Juliet’s house, unless seeing it holds deep meaning to you. It definitely makes my “over-rated” list.

Verona is also home to several Roman era structures. On of them, right in the center of town, is a coliseum. Today, this stadium is used for opera performances and concerts.

I spent my day walking the streets of the city, with no real destination in mind. They are filled with beautiful buildings, and frequently open onto small piazzas. Of course, I did make a few stops along the way. One was the Gallery of Modern Art. It is located in the Palazzo della Regione. Its collection covers from the early 1800’s through the middle of the 1900’s. The collection is mostly local artists, but it shows how the major themes in art traveled way beyond the expected centers in Paris and New York.

Leaving the museum behind, I came to the Piazza dei Signori, where I had lunch at Trattorio Pizzeria Imperio. I had a great view of the square and wonderful pizza. From my table I was able to watch people come to take pictures in front of the statue of Dante that dominates the piazza. Dante lived in Verona from 1312 until 1318, during his exile from Florence. In fact, his reference to the “sadness of the Montacchi (Montegue) and Cappelletti (Capulet) families in his Purgutorio” is pointed to by many people one piece fo evidence that the story of Romeo and Juliet is based on real events.

After lunch, I walked to the Church of Saint Anastasia. Built during the 14th century, the church sits along the Adige River. To me, the most interesting art work were the hunchbacks that hold up the holy water fonts at the front of the church.


As I walked towards the Ponte Pietra, a bridge built by the Romans in 100 BCE, I stopped at a small riverside piazza. I spent some time watching a duck begging for some pizza. The Ponte Pietra is an arched stone bridge that provided access from the town to an amphitheater on the far side of the river. The bridge was destroyed by the German army as they retreated at the end of World War II, and it was rebuilt, using the original stones in 1957. 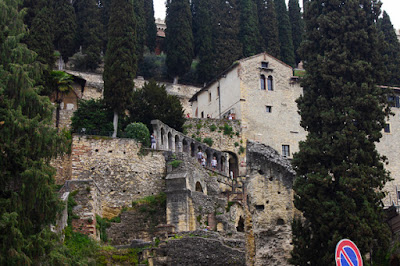 I crossed the Ponte Pietra to the Veronetta neighborhood, and left the crowds behind. This residential area is home to a few smaller museums and churches, but on this holiday, it was mostly deserted. It was great to be able to walk along empty streets. 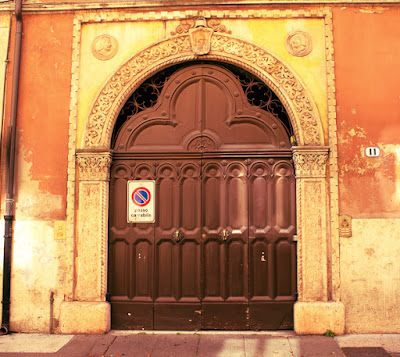 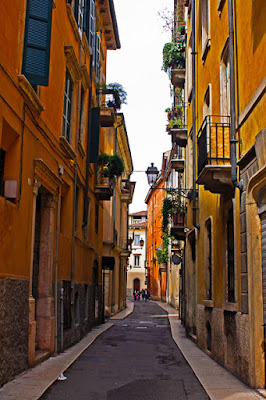 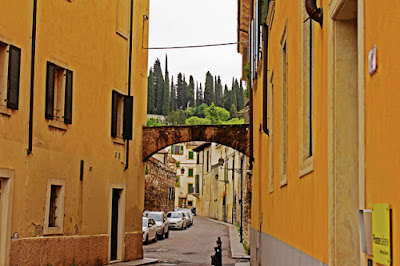 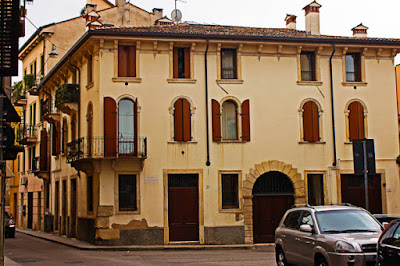 I walked along the Adige, and worked my way back to my car. Except for the crowds, I really enjoyed my visit to Verona. Maybe it is my penchant for smaller museums, and out of the way places, but I was able to avoid the worst of the lines and throngs of people. But next time, I will pay more attention the the local holidays.